A pediatric cataract is one of the leading causes of childhood blindness. Untreated cataracts in children lead to tremendous social, economic, and emotional burdens to the child, family, and society. The Paediatric Ophthalmology Department at Madhav Netralaya is a top eye care hospital in Nagpur which is well equipped to handle your valuable child and give the best possible eye care. We have doctors specially trained in pediatric eye care to take care of your little one.
What is a Paediatric Cataract?
A cataract is any cloudiness or opacity of the natural lens of the eye, which is normally crystal clear. There are many types of cataracts. A mostly adult cataract is age-related but cataracts can be there in children also.
In adults, cataracts occur after the eyes and vision are developed and stable. Most adults can have good vision again after the cataracts are removed. In children, both eyes and Brain are at the developing stage. If the Brain doesn’t get good signals to develop eyesight from the beginning it can result in serious long-term effects on their vision.
Thus pediatric cataracts are always treated as an emergency. The sooner we treat the cataract; the faster and better will be the brain development to understand the vision. We call this as visual maturation. First two months are called a critical period of virion maturation. Early detection and prompt treatment can prevent permanent vision loss in children with cataracts.
Causes of Paediatric Cataracts in Children - 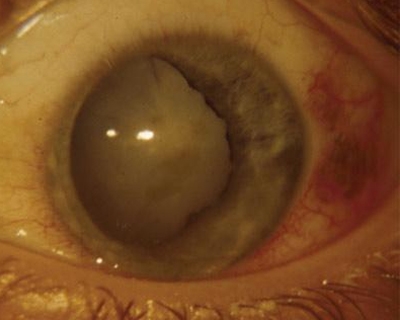 A traumatic cataract in the eye of a child. The injury also damaged the iris
Types of Paediatric Cataract- The human crystalline lens consists of three parts including a center part (nucleus), an outer part (cortex), and a capsule surrounding the cortex. Cloudiness can occur in one or more parts of the lens which discriminates the types of cataract
Early Diagnosis and Swift Treatment
Treatment Takes a Long-Term Strategy 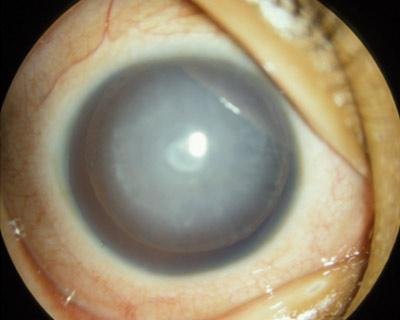 Pediatric cataract in the eye of a child born with aniridia i.e (missing iris)
Treatment for pediatric cataracts can vary depending on the type and severity. Unlike adults with full-sized eyes, children require specialized surgical instrumentation and techniques. When performed by an experienced surgeon, cataract removal is generally safe. The most common risks include glaucoma, retinal detachment, infection and the need for more surgeries.
For most children, surgery is just the first step to rehabilitate the eyes. Ongoing treatment must repair eye-brain connections. This involves teaching the eyes how to focus properly.
After surgery, children often need some combination of contact lenses, intraocular lenses implanted in the eye or glasses. If amblyopia has developed, the child may need patching treatment. This treatment involves covering the stronger eye to stimulate vision in the weaker eye.
Children who receive timely treatment and follow-up have a good prognosis. Successful outcomes may require years of individualized visual rehabilitation. Frequent follow up is mandatory for every child undergoing cataract surgery.